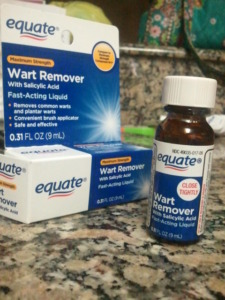 What is salicylic acid?

Salicylic acid is a colorless, organic, and naturally occurring acid found in many plant species. It functions as a hormone and is also required for many aspects of organic synthesis. Salicylic acid also has many antibacterial and anti-inflammatory properties.

Not only used for warts, salicylic acid is also a primary treatment for many skin ailments including acne, psoriasis, corns, dandruff, and ringworms. In fact, salicylic acid is such an important medicine it is included on the World Health Organization’s list of essential medicines.

What does salicylic acid do to warts?

In topical wart medicines, a typical concentration of salicylic acid is between 17% and 27%. At this strength, an application will burn through the outer layer of the skin of the wart. Depending on the size of the wart, several applications will be required to completely remove the wart.

Statistically, over-the-counter salicylic acid treatment is successful at removing, quite impressively, over 70% of all warts. The other 30% of wart cases require the assistance of a dermatologist, the kind of doctor that removes warts and treats other skin conditions.

How long does it take for salicylic acid to remove a wart?

There are several factors that determine the length of treatment required to remove a wart. The first is the size and age of the wart. Small, newly formed warts are quicker to remove than are older, larger, and more entrenched warts. A small juvenile wart may fully peel off with one or two applications, while the larger wart could take a week or longer.

The second factor is the type of wart. Plantar warts on the bottom of the feet are notoriously tough skinned and difficult to remove. On the other hand, the skin of soft fleshy warts is easier and faster for salicylic acid to dissolve.

Finally, there are also variations from person to person based on skin type and individual reactions to salicylic acid. Some people’s skin is highly sensitive to salicylic acid while others are not. Generally, any wart should take no longer than a week or two to be fully removed with salicylic acid treatment. Any longer than that and you should check with your dermatologist.

How to treat a wart with salicylic acid

If you’ve never applied salicylic acid to a wart before, it’s a straightforward process. Follow the specific directions listed on the packaging of your chosen wart remover. As mentioned, over-the-counter salicylic acid wart treatments come in many forms, such as liquids, gels, and pads. Each type has its own best practices for application.

Keep in mind that when using a new wart product for the first time, it is recommended to apply only a very small initial dose to test your skin’s sensitivity to it. If no adverse effects are seen during the test, proceed to a full application as specified by the directions.

All methods will involve multiple applications of salicylic acid to completely remove the wart. Generally, salicylic acid should not be applied to a wart more than once or twice a day. Doing so more often increases the risk of side effects and does not improve efficacy.

During treatment, it’s a good idea to cover the wart with a band-aid or gauze to keep it protected from infection. This also helps to prevent the salicylic acid from being rubbed off accidentally, requiring a reapplication.

As mentioned, it’s likely going to take several treatments for the acid to burn through each layer of skin on the wart. You can use an emery board to file down the skin after or between each application. It may be painful and the wart might bleed a little bit, but that’s normal.

Some warts are stubborn, and will keep growing back over and over again no matter how many times you burn them off with salicylic acid. That’s when it’s time to go to the doctor. Dermatologists have access to liquid nitrogen which is great for getting rid of even the most stubborn warts.

What not to do with salicylic acid

All over-the-counter wart treatments are labeled with an expiration date. Salicylic acid is a stable compound, however, and does not degrade easily. As long as it is stored in cool temperatures and in a tightly sealed container, salicylic acid will remain effective for long after its listed expiration date.