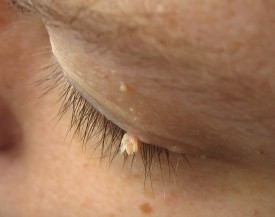 A filiform wart on the upper eyelid

A wart that grows on the eyelid is most likely a filiform wart, and its removal can be tricky because of its proximity to the eye. It can be especially bothersome because the wart is constantly irritated when the eye is blinked. Additionally, eyelid warts are quite unsightly because of their prominent location on the face.

How to identify a filiform wart

Filiform warts are unusual looking and do not have the same appearance as other types of warts. They look like a branch or twig sticking out from the skin, similar to a skin tag. Filiform warts most frequently appear on the face or neck, and that is why they are also called “facial warts”. You may reference the picture of a filiform wart on an eyelid to get a better idea of their appearance.

A unique characteristic of the filiform wart is its rapid growth rate. It can grow from a small bump to much larger in just a matter of a few days, causing much itching and irritation. Oftentimes, there will be more than one filiform wart appearing in a cluster on the eyelid.

Additionally, filiform warts do not have the same hard outer skin covering that most warts have. They are soft and flexible, similar to a skin tag. This makes filiform warts somewhat easier to remove, but when the wart is on the back of an eyelid it greatly complicates the removal process.

Causes of warts on the eyelid

Filiform warts on the eyelid are caused by a infection of the HPV virus, just like all other warts are. This highly contagious virus is contracted from an infected individual through direct contact. For example, by touching an object that an infected person has used and then rubbing your eyes.

The outer layer of skin, or epidermis, provides protection for the body from wart viruses. When there is broken skin, however, the HPV virus has the opportunity to embed itself in the skin. A small cut or scrape on the back of an eyelid, even microscopic ones, is all it takes for the wart virus to get inside your skin. The broken skin on the eyelid allows the virus to take root, and a filiform wart begins to grow.

Often, an eyelid wart is so irritating to the victim that it induces frequent rubbing and scratching. This damages the skin further and promotes the spread of the contagious virus to the surrounding skin. This is why filiform warts often grow in groups or clusters.

Treatment for filiform warts on the eyelid

For most warts, over-the-counter medications for wart removal are acceptable and relatively effective. But in the case of an eyelid wart, it is not recommended to use the do-it-yourself approach. As mentioned earlier, the removal of a filiform wart on the back of your eyelid is a tricky proposition because of its very sensitive location.

The typical wart medications bought in stores use the active ingredient salicylic acid, which is highly caustic. Salicylic acid kills living skin cells on contact. It essentially burns the wart off your body. Putting salicylic acid or any other harsh chemical on the eyelid is strongly advised against. It is all too easy for the eyeball to become infected either during the application, or when a person blinks his eyes. Getting salicylic acid in your eye can cause permanent eye damage and vision problems. So please don’t try to use these products to remove a wart from the back of your eyelid.

Instead, see your doctor for treatment. Dermatologists are the type of doctor that specialize in wart removal. They have several safe and effective methods at their disposal to remove that pesky wart on your eyelid. For example, dermatologists can use liquid nitrogen to burn the wart off in one session. They may also use a scalpel to cut the wart directly off your eyelid. Sometimes, laser surgery or cryotherapy may be utilized for eyelid wart removal.

How to prevent the growth of warts

It’s worth mentioning that a strong immune system is one of the keys to preventing the growth of eyelid warts. A strong immune system will kill the wart virus before it has a chance to grow and ever becomes visible on your skin. By eating right and living a healthy lifestyle you will be strengthening your immune system and helping your body to prevent the development of warts.

Also, refrain from using face towels, cosmetics, or other facial items that have been used by another person. These are common ways the virus is transferred from an infected person to you. It’s easy to forget that the cause of a painful wart on your eyelid a simple infection by these invisible viruses.

In closing, I also want to mention that filiform warts on the eyelid are a common problem for canines as well. The same wart viruses that humans are susceptible to also attack our pets. If your dog has an eyelid wart, follow the same treatment procedures described for humans. Don’t try to remove the wart yourself, but rather take your dog to the veterinarian for treatment.

Dogs have a strong desire to scratch eyelid warts because of the itching and irritation, which only leads to the growth of more warts. You may try to prevent your dog from scratching his eyelid warts by placing a small cone around his head until you can get him to the veterinarian.