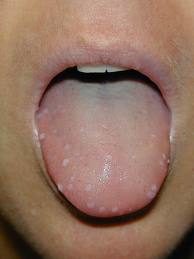 Discovering a wart on the tongue can be a stressful experience. People often wonder whether or not you can get a wart on the tongue, and those who are afflicted with it want to know how it happened and what they can do about it. Luckily, tongue warts are fairly rare.

What causes warts on tongue?

In most cases, a wart on the tongue is caused by a virus that is sexually transmitted from one person to another. The virus is known as human papilloma virus and once you get the virus, you have it forever. But don’t be distressed, over 90% of the human population has this virus. And just because the virus will stay with you forever, that this not mean that the wart will as well.

The wart is usually sexually transmitted, but this is not always the case. Some people will get a tongue wart simply by being unlucky. But the vast majority of them are transmitted during oral sex. Most likely the person afflicted engaged in oral sex with someone carrying the virus and contracted it in this way.  Any kind of open sore or abrasion on the tongue greatly increases the chance that the virus can take root on the tongue.

A single tongue wart can appear, but often they come in small clusters. The virus is highly contagious and spreads easily and rapidly, and thus often form small clusters on an area of the tongue.  The warts are also very fast-growing and they have a scaly texture to them. In general, if you have a tongue wart you will know it as it will be quite obvious and hard to miss.

Treatment for warts on the tongue

Sometimes the wart will fall off on its own after reaching full size. But they also can be quite pesky and may not go away until the root is removed. These type of warts are normally very responsive to topical solutions and creams, but warts on the tongue are tricky because most of these medications are toxic if applied orally and are not meant for use on the tongue.

For this reason, it is recommended that you seek the advice and expertise of your family doctor to have a wart on the tongue removed. He can assess your situation and advise a treatment plan designed specifically to your symptoms. Once the warts are properly removed, in all likelihood they will not come back.