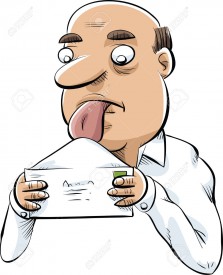 There was a story on CNN recently about a woman who cut her tongue while licking envelopes. Supposedly, the the cut on her tongue developed into a severe infection. When she went to have it checked at the hospital, the story goes that the doctor lanced the infection and to their horror a baby cockroach crawled out of the flesh of her tongue.

The implication was that cockroach eggs had become embedded in the woman’s tongue, causing the infection and leading to baby cockroaches developing and hatching out of her own tongue. Obviously, this is a highly sensational story and the stuff of nightmares. If true, the simple task of envelope licking would forevermore be considered a potentially dangerous risk to one’s health.

So could this be true? Is it possible that cockroach eggs can be transferred to the human tongue via glue on the flap of an envelope? And even further, can cockroach eggs become embedded inside human skin and incubate there, only to hatch at a later time in a horrific scene?

The answer is that no, it is scientifically impossible that this story played out as described. There are a few reasons why you don’t need to be paranoid about licking envelopes for fear of getting cockroach eggs inside your tongue.

First, cockroach eggs are easily visible and too large to become embedded inside the tongue without being noticed. Cockroach eggs are also encased in groups of approximately 40 together in a large, bean shaped sac called an ootheca.

The ootheca is approximately the size of the final segment of your pinky finger, from the last knuckle to the tip. So this is obviously too large to get stuck inside a cut in your tongue. Even if a single cockroach egg did break loose from the ootheca, it would still be noticeably big inside your tongue.

It is possible, though, that a single or cluster of cockroach eggs could possibly become attached to the sticky glue on the back of an envelope flap. It’s true that cockroaches are attracted to paper and cardboard and this could easily lead to cockroach eggs coming in contact with envelopes in offices, warehouses, and boxes.

But even if you did unwittingly lick cockroach eggs off the back of a mailing envelope, the body has defenses against this scenario and there is no way the eggs would hatch inside your body. If you swallowed cockroach eggs, they would be quickly destroyed by the high acid contents of the stomach, namely hydrochloric acid.

Additionally, cockroach eggs contain inside the ootheca are too large to be swallowed inadvertently and would definitely not cause an infection in the tongue or become stuck there. It is too large and intrusive for that. And individual cockroach eggs do not survive long outside the protective case of the ootheca if they become physically removed prior to being fully developed.

So you can chalk this scary story up as a hoax or myth. I don’t know why anyone would still manually lick envelopes in this day and age, but if you do you don’t need to worry about this crazy cockroach egg legend.