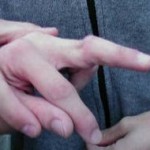 A dislocated knuckle occurs when the joint pops out of place but no bones are broken.  It can usually be “popped” back into place by a doctor once a diagnosis is made.  If not set correctly, a dislocated knuckle can cause long-term pain and arthritis and other health complications, so it is important to seek treatment immediately by a physician.

Most of the time, a dislocated knuckle happens while playing sports, especially basketball, when the ball strikes a straightened finger with heavy force and causes a dislocation.  They can also occur during a fall or an accident, such as bicycle and car accidents. More often than not, the dislocation occurs in the middle knuckle of one of the four fingers.  It is very painful malady and the victim will most certainly be well aware of its presence.

Make sure to see a doctor immediately so that he can properly diagnose the issue, and if it is in fact only a dislocation, he can properly set it.  If not set correctly, the knuckle may heal in a disjointed direction, and this will necessitate more complicated treatments in the future to fix the problem.

A dislocated knuckle will usually swell and have quite a bit of discoloration, usually blue or black.  Over the next couple of days after the injury, the pain and swelling will increase and then gradually fade away.  You should start to see improvement in the situation over the next several days and weeks.  If the knuckle does not seem to get better on its own or even worsens, make sure to see a doctor because there could be an infection or other complications that need to be attended to by a physician.

At the hospital or doctor’s office, usually anesthetic will be administered to alleviate the pain.  This can be done either orally, or through an injection or even an IV.  The anesthetic will help the patient to keep the finger still while the doctor manipulates the knuckle.  In the days and weeks ahead while the wound is healing, over-the-counter pain medications such as Motrin and ibuprofen may be taken as needed to help manage the pain.

As mentioned, normally a dislocated knuckle will heal on its own in a matter of days or weeks.  But proper initial treatment is critical to ensure that the knuckle heals correctly.  Failure to do so can result in medical complications and even disfigurement.