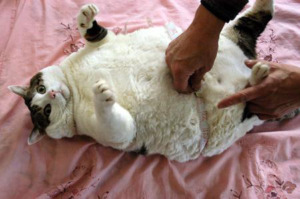 Is it really true that drinking lots of soy milk promotes weight gain? A quick Google search demonstrates that opinions are all over the map. For example, some health websites (here and here) sound the alarm against soy milk. They say it is not only fattening but also highly unhealthy.

These claims generally revolve around pesticides used in producing soybeans, and the unproven idea that estrogen-mimicking compounds (phytoestrogens) in soy milk wreak havoc on men’s hormones. This article even goes as far as saying that soy milk is so unhealthy that it should never have any place in anyone’s diet.

Well, as an avid soy milk drinker and a student of nutrition, I feel confident and entitled to speak my own two cents on the issue. As background: I drink soy milk nearly every day as a creamer for my coffee, in my oatmeal and breakfast cereal, and just by itself is a refreshing drink.

I also have lived in China for four years, where soy milk has been popular for centuries. How many fat Chinese people have you seen? (Not scientific proof, admittedly, but reasonably strong anecdotal evidence, nonetheless.)

The nutritional content of soy milk is not fattening

When analyzed from a nutritional perspective, there is nothing in soy milk that even hints at weight gain. Nutritionally, soy milk is actually somewhat similar to skim and low fat cow’s milk. Let’s take a look at the nutritional components of soy milk to see whether it really promotes weight gain.

Soy milk is high in protein. One cup has 11 g. Protein rich foods suppress the appetite and promote weight loss. And soy milk is one of the only plant-based sources of complete protein, meaning it has all nine essential amino acids required by the human body to maintain optimal health. That’s a reason soy protein is important to the diet of many vegetarians.  So soy protein is high quality, nutritionally speaking, especially for a plant-based protein.

Soy milk does have 3.2 g of dietary fiber per serving, which is 13% of the recommended daily amount. Fiber promotes weight loss by giving you a feeling of fullness, or satiety. Fiber also absorbs unhealthy LDL cholesterol and passes it before the digestive system processes it.

Soy milk contains 4.7 g of fat per cup, similar to cows milk. The difference is that only a half a gram is of the unhealthy saturated variety. Additionally, soy milk has no lactose or cholesterol.

Fat from soy milk and other plant-based sources are healthier than animal-based sources. They contain higher levels of unsaturated fat which increases healthy HDL-cholesterol.

And remember that fat content itself is not inherently unhealthy and does not necessarily promote weight gain. It’s the quality of the fat that matters, and unsaturated soy milk fat is very good.

In conclusion, there is nothing nutritionally inherent in soy milk that will make you fat. It is a processed food, which is not ideal for optimal health, however. Perhaps its worst attribute is its moderate levels of refined carbohydrates. But the protein and fat profiles of soy milk are quite healthy.

As always, the only cause of weight gain is taking in more calories that you burn. In my opinion, you should enjoy soy milk in moderation without an irrational fear that it will make you fat.

Photo: “fat cat” by Yukari* is licensed under CC BY-SA