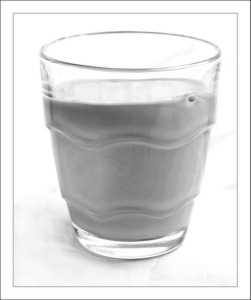 Soy milk should only cause digestive problems for people with soy sensitivity.

There is nothing intrinsic to soy milk that would directly cause stomach bloating, indigestion, or flatulence. Soy milk is, of course, made from soybeans. And beans are notorious for causing gas. But most of the fiber that could promote bloating and flatulence is removed during processing.

Soy milk is generally well-tolerated and digests quite easily. I drink it daily, both in my morning coffee and my breakfast cereals. I believe it to be a healthier substitute for cows milk, and can personally attest that soy milk doesn’t bloat.

But there are some instances when soy milk can cause issues for certain people.

The only time soy milk should cause digestive problems is for a small percentage of people who have a congenital condition called soy intolerance. Soy intolerance, or soy sensitivity, is when a person’s digestive system is unable to properly break down soya products. Often, the problem lies specifically with an inability to process soy protein.

This leads to a buildup of soy and its byproducts in the stomach/intestines. Symptoms are belly bloating, gas, and indigestion. If you repeatedly suffer these symptoms after drinking soy milk, it’s possible that you have some degree of soy intolerance.

You can try to self diagnose through experimentation.  Alternatively, your healthcare provider can definitively test for soy sensitivity. Some people find that drinking soy milk always causes digestive issues, while others discover that it must be combined with another food to produce symptoms. It’s really a case-by-case issue.

Soy allergy is different from intolerance. Instead of causing various digestive issues, allergies cause a wide range of physical symptoms which can be quite severe.

These range from wheezing and difficulty breathing, to skin rashes, diarrhea, nausea, and vomiting. Obviously, if you’re experiencing serious symptoms you should seek medical care.

Soy milk doesn’t cause digestive issues for most people

For the vast majority of us who don’t have soy allergies or intolerance, drinking soy milk is perfectly healthy. Do you know that soy protein is one of the only plant-based sources of all nine essential amino acids, making it a complete protein. It also digests easily.

A quick Google will show there are many conflicting reports about whether soy milk is healthy or not. Some are very alarmist and say that soy milk should never be consumed. Those opinions are misinformed, in my opinion.

Just look to Japan and China, the countries that first invented soy milk. I have lived and worked in China from 2014 through 2018, and can tell you that soy milk is very popular here.

How many Chinese and Japanese people have you seen with bloated and overweight midsections? Not too many, am I right? That is pretty strong anecdotal evidence that drinking soy milk doesn’t usually cause bloating or other digestive problems. More likely, only on an individual basis.

If you have found your way to this article, it’s possible but unlikely that you are one of the unlucky who have soy sensitivity. With proper testing you should be able to determine if that’s the case, and adjust your diet accordingly.

If you do have soy sensitivity, please leave a comment below. What has your experience been like and what advice can you offer? Thanks.

Image: “Soya Milk.” by PiggBox. is licensed under CC BY-NC-ND