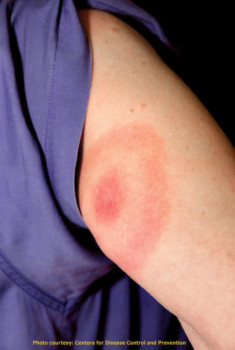 Red bullseye around the bite of a tick carrying Lyme disease.

But sometimes a mosquito bite is immediately surrounded by a red or pinkish rash. The discolored ring of flesh may bring fears of serious infection or even Lyme disease. But how worried should you really be?

What causes a red circle around a mosquito bite?

An itchy mosquito bite is simply an allergic reaction to saliva /  liquids injected into the skin. Some people have a severe reaction to mosquito bites, while others don’t much of any. The wide deviation is due to individual differences in allergies to specific types of mosquitoes, along with many other variables.

A red circle around a mosquito bite is just a more severe allergic reaction, and usually not a sign of something more serious. It is most commonly seen in children and toddlers?

Why? When we are exposed to various pathogens, our body responds by producing histamines and other immune system defences. Toddlers and children have not yet been exposed to many types of mosquitoes. Thus, their immune defence is weak and allergic response high. So, a bite from a new kind of mosquito (for them) may result in a heavy red rash around the bite. With age, the immune system naturally matures and strengthens.

Personally, I experienced this phenomenon when I moved to China for a few years while in my mid 40’s. Bites from these Asian mosquitos resulted in a bright red rash all around the bite. And it hurt like heck. After awhile, though, my immune system got up to speed with the new allergens, and these extreme allergic reactions went away.

Is a red rash around a mosquito bite a sign of something more serious?

Usually, no. But there are some symptoms that may indicate a serious illness:

Does the rash look like a bullseye used for target practice? (Please reference the featured photo above.) In other words, is there an unaffected ring of flesh in between the bite and the circular rash? The bullseye is a telltale sign of Lyme disease, a dangerous infection caused by ticks. (Mosquito bites can’t cause Lyme disease, only tick bites can.) If you see a bullseye, seek medical attention at once. Antibiotics are necessary to cure Lyme disease.

Other symptoms to watch out for include nausea, vomiting, chills, fever, fatigue, muscle pain and fatigue, mental confusion, yellowing of skin or eyes, and general malaise. If any of these symptoms present, medical attention should be sought. Mosquito bites do transmit malaria, yellow fever, and other serious diseases, which these symptoms may signal.

The vast majority of mosquito bites, however, even those with red rings around them, are ultimately harmless. They can be very itchy and bothersome, but are not dangerous or a sign of a larger medical issue.

So don’t overly worry about a mosquito with a red circle, at least initially. Keep an eye on it to see how it progresses. A normal mosquito bite should go away within 24 hours without any medical attention. If instead, it gets worse and some of the serious symptoms described above are present, then it is time to visit the doctor.

Tips for treating the inflammation, itchiness, and rash

No matter how uncomfortable and irritating the bite and rash may be, resist the urge to pick at it. Popping a mosquito bite has many potential negative consequences. For children, it may be necessary to cover the bite with gauze to prevent them from picking at it.

If the bite is not scratched open, several over-the-counter medicines are helpful for alleviating symptoms. Hydrocortisone cream and Benadryl are best. They fight inflammation and reduce the allergic response — ie. itchiness and pain.

Use these topical skin creams if you happen to have them in your medicine cabinet: Aloe vera soothes burning sensations, and calamine lotion helps with itchiness and swelling.

If the bite is already picked open and bleeding, however, don’t use the above mentioned medications. Instead, apply an antibacterial ointment and keep it covered to prevent infection.

It can be quite alarming to discover a mosquito bite surrounded by a circular, red rash. Usually it is harmless, though, and not a sign of a serious medical problem. It is the result of an intense, severe allergic reaction. Due to their weaker immune system, it is most common in toddlers and children, but it can happen to adults, too.

Usually, the rash will completely disappear with a day or so, just like a normal mosquito bite. If instead the symptoms get worse, or if any of the previously-described, severe symptoms are present, seek medical attention. The classic bullseye indicating Lyme disease should be acted on immediately.

Get Rid of Pesky Mosquitoes

Photo: “Bullseye” by fairfaxcounty is licensed under CC BY-ND