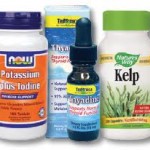 Many processed foods, especially salt, are supplemented with iodine

You’ve probably seen the containers of table salt labeled “iodized salt”. Because iodine deficiency was prevalent in much of the world in the early 20th century, many countries mandated the addition of iodine in certain foods, especially salt. In Canada, this practice is currently mandated, and in the United States it is not mandated but is still practiced by many leading food manufacturers.

What is iodine and why does the body need it?

Iodine is one of the natural elements found in nature. The body cannot produce it and it must obtain all that it needs from the diet. Most natural iodine is found in the sea and can be obtained naturally by eating seaweed, kelp, and seafood. Because of iodine’s connection to the sea, historically many cases of iodine deficiency have occurred in locations that are inland and far from the sea.

Iodine is especially important to functions of the thyroid gland which needs iodine to produce hormones. If the thyroid does not have enough iodine, it has to work harder to perform its essential functions. This can cause a goiter, an enlarged thyroid gland, which can become apparent in swollen neck.

Iodine deficiency is also one of the leading causes of mental retardation worldwide, producing typical reductions in IQ of up to 20 points. Some have speculated that deficiency of iodine and other nutrients can be associated to observe differences in IQ between certain ethnic groups. Cretinism is a condition associated with iodine deficiency, as well as mental deficiency, deaf/mutism, hypothyroidism, and stunted growth.

Iodine supplements taken orally have proven successful at protecting the thyroid gland from exposure to radioactive iodides. Potassium iodine tablets are available and FDA approved for this use, to protect against radiation damage to the thyroid. These iodine supplements should only be taken in a radiation emergency, however, and should not be taken in advance or to prevent illness.

Iodine drops can be added to water to kill germs and bacteria. It is often utilized by backpackers and hikers to purify free standing water sources. Although the taste of the water is sometimes lacking, the iodine does effectively purify and reduce the risk of sickness. Iodine can also be applied directly to a cut or wound to kill germs.

Once a Day Vitamin Supplements