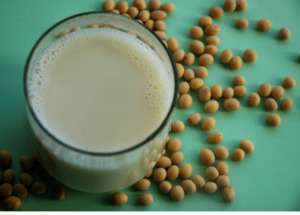 You can freeze soy milk, but it isn’t optimal.

Can you freeze soy milk to preserve it for use at a later time? Yes, freezing soy milk will prevent it from spoiling. And from a nutritional standpoint, it won’t degrade the product or make it unhealthy to consume.

On the surface, it would seem that freezing soy milk is a viable option for increasing storage life. But freezing has many downsides, too, which in my opinion makes it unappealing for most situations. Let me explain.

The freezing process significantly degrades the the product quality in several different ways. First, thawed soy milk just doesn’t taste as good as it did before being frozen.

The texture and flavor of soy milk are adversely affected by freezing. Soy milk is carefully formulated to mimic the consistency, thickness, and texture of cows milk. But soy milk is more delicate than dairy milk and doesn’t lend itself as well to freezing.

When freezing, the various ingredients in soy milk tend to separate. Even with vigorous shaking, the soy milk usually never regains the same texture. The taste often seems a bit off, as well.

With modern, vacuum-sealed packaging, soy milk containers have expiration dates a year or more in the future. They don’t require refrigeration, and won’t take up valuable space inside your freezer. With this kind of shelf life, there is scant need to freeze it.

And if you’re still worried about your soy milk going bad before you have a chance to consume it, you can purchase the ubiquitous single-serving containers of as little as 200 mL. I use these small soy milks daily on my breakfast cereal and as a creamer for my morning coffee. They are always guaranteed fresh –no freezing required.

Even opened soy milk packages will be edible for about two weeks hence. This usually giving more than adequate time to finish off that open container. If not, you certainly can freeze it to keep it from spoiling. But I personally would rather just throw it away, rather than freeze it and try to save a few pennies.

Soy milk is inexpensive. So why freeze it?

Additionally, these days soy milk is relatively cheap. The rapid rise in popularity of soy milk over the last decade is evident in the large selection of soy milks now available at grocery stores. Greater production volumes make for better efficiency and cheaper prices.

Soy milk used to be more expensive than cows milk, but not anymore. Being so cheap, it makes more sense to me to just throw out any little bit of leftovers. Freezing it may preserve it, but it just isn’t worth the space it takes up in my fridge, and especially the loss of taste and texture.

How to freeze soy milk

If you do decide to freeze soy milk, there is nothing too special about it that makes it different from freezing other liquids. Just make sure you shake it well after thawing to help dissolve all the solids that may have separated during freezing.

But as mentioned, good luck with that. Usually, soy milk never regains its taste and consistency after being frozen.

And remember, all liquids, including soy milk, expand when they are frozen. So there needs to be some empty space in the container to allow for this expansion. Otherwise the carton may crack, break, or even explode in the freezer. Most prepackaged soy milks have allowed for this and will freeze fine.

For all of these reasons, it is my opinion that it just doesn’t make sense to freeze soy milk in most situations.

Really, the only time that would is if you were making your own homemade soy milk and didn’t have the means to vacuum seal it for long-term storage. Then it might make sense to store the soy milk in the freezer. But even then, it’s going to take up a lot of space in the freezer and seriously degrade the quality of your soy milk.

Are you interested to also learn how to heat soy milk properly? It also requires special procedures in order to retain its flavor and texture.