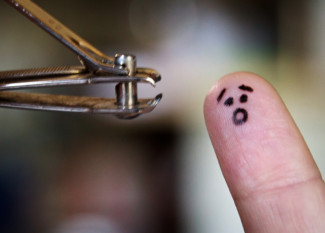 Please don’t use nail clippers to cut off a wart!

I’ve read many stories (mostly horror stories) about people using a knife, razor blade, scalpel, or nail clippers to lop off a wart. I get it. A wart can be really annoying and painful. It’s tempting to simply chop it off straightaway.

But please don’t. Think it through before you hastily cut off an untreated wart. In this article I will explain why it’s not a good idea, and show you how to properly remove a wart.

5 reasons you shouldn’t just slice off a wart

Hopefully, I’ve convinced you to think it through before you hastily slice off that annoying wart with a razor blade. There are better ways to do it. Let’s take a look.

How to properly remove a wart

The good news is that only the most stubborn warts require a visit a dermatologist. Most warts are successfully removed at home with OTC wart treatment.

There are many different kinds of over-the-counter wart medicines. Liquids, pads, sticks, wart freeze, etc. (There are links to all of them at the end of this article.) Don’t let the variety confuse you. They all work. And almost all of them use the same active ingredient.

Salicylic acid “burns off” a wart by killing skin cells on contact. When you apply salicylic acid to a wart, the top layer of skin dies. You should then soak the wart in water to soften the tissue. Next, use an unused, sterile emery board to file off the layer of dead skin. It won’t hurt, nor bleed nearly as much as it would if you chopped of the wart without treating it first.

It will probably take a few applications to get the wart completely shaved down. Some warts are tougher than others. Make sure you pull the root of the wart out, too. Most warts have a single root that digs into the skin, below surface level. Getting the root out will ensure that the wart doesn’t grow back again.

Between treatments, be sure to cover the wart with sterile gauze or a bandaid. Keep it clean. The last thing you want is for the wart to get infected. A wart infection causes all kinds of complications.

My favorite type of OTC wart treatment are the pads, or adhesives. They aren’t messy like the liquids can be. You just slap it on the wart; couldn’t be easier. And a pad protects an open wart from bacterial infection, too. You don’t have the extra step of covering the wart with a band aid or gauze.

If you want to go the homeopathic route, thuja oil removes warts, too. Thuja oil is extracted from the leaves of a North American evergreen tree. It kills skin cells just like salicylic acid and is a potent and formidable wart remover.

If you chop off that pesky wart, you are probably going to regret it. For better results, please follow the methods described in this article to remove it with properly. I think you will thank me later.

Have you already cut off a wart and want to share the experience? Disagree with my opinions? Please comment below. Thanks.

Photo credit: “Oh no!” by ~dgies is licensed under CC BY-NC-ND