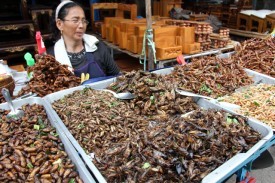 Cockroaches and other insects prepared for eating in Thailand

You probably consider eating a cockroach disgusting, because in Western society we do not value insects as a food source. We largely consider them dirty creatures that need to be eradicated, not eaten.

But do you know that people eat cockroaches in many countries and cultures around the world, especially in Asia?

Yes, cockroaches are edible and healthy to eat, provided they are prepared properly. They must be washed and thoroughly cooked prior to eating, to kill any bacteria on the cockroach.

Don’t eat a raw cockroach, though. Just as you wouldn’t eat raw chicken or beef. The germs need to be burnt off in the cooking process. Usually this is accomplished by frying the roaches in vegetable oil, which also gives them a crunchy and crispy texture.

For example, here in Thailand, they serve fried insects in many local dishes. They are also quite popular as a street food. Frequently, food carts can be spotted with the various types of insects on display.

Western tourists often gawk at this, and stop to take pictures — after overcoming their initial shock. Their apparent disgust sometimes offends or insults the locals, with whom fried roaches and crickets are quite popular.

I have to admit, I did a double-take the first time I saw a street food cart filled with various fried insects, including cockroaches. I did my best to be polite and not show it, but the strong cultural notions I brought with me from America made me look down on the practice of eating roaches, initially.

But since then I have become accustomed to the practice, and it doesn’t shock me anymore. In fact, I really think it is a quite sensible idea. If cockroaches are plentiful and cheap, and also tasty, why shouldn’t people eat them?

For most people, it’s just a matter of getting over your pre-existing hangups about cockroaches being dirty and disgusting. However, for some this may prove to be a high mental hurdle, indeed.

Roaches and insects are actually quite nutritious and high in protein. They are also plentiful and cheap, especially when compared to meat. Animal sources of protein can be quite costly, especially for many people of developing countries with lower incomes.

For this reason, the use of insects as food and as an alternative source of protein is being promoted by some researchers and nutritionists. Obviously, it is much cheaper to farm insects than it is to raise beef or chicken or pork.

Not only is it cheaper to eat cockroaches, it is also better for the environment. Less meat means less greenhouse gases which contribute to global warming.

The locals here in Thailand claim that roaches taste great. That’s the reason they form the basis for a number of comfort foods in the local culture.

Admittedly though, I have not yet felt adventurous enough to take the plunge and eat a cockroach. Mentally and culturally, it’s just too far. I hope to one day get there, because from a logical perspective I think it makes sense.

But I take their word for it that roaches are delicious and completely healthy to eat. I think if I couldn’t afford to buy beef, chicken, and the more traditional forms of animal protein, it would definitely force me to be more open to eating insects as a replacement.

Have you tried eating cockroaches? What do you think?

Are you ready to sample some edible insects?