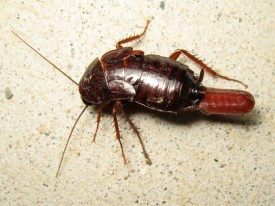 No, cockroaches are not asexual, and do require a mate to reproduce.  Some species of roach have specialized so that the female can store sperm in her body after copulation to be used to fertilize eggs at a later time. Therefore, they do not need to mate as frequently. These roaches are not truly asexual but display some characteristics which may appear to be asexual in nature.

The ootheca is formed from a protein substance which hardens inside the female’s body. Some roach species drop the ootheca from their body before the nymphs, or baby cockroaches, hatch. A few species however, notably the German cockroach, instead carry the ootheca on their body until the eggs are ready to hatch.

An adult female cockroach can lay eggs up to four separate times per year. Most species of cockroach deposit the egg casing in a safe and secure place to enhance the likelihood of they nymph’s survival. Hidden cracks and crevices serve well for this purpose.  It takes about six weeks for the eggs to develop and hatch into nymphs. The nymphs are colored white when they are born, but quickly turn brown when exposed to oxygen.

Some species of cockroach display maternal instinct, and the nymphs remain close to the mother for several days. While other species produce milk in order to nourish their young. There are a wide range of cockroach species covering the globe, with many reproductive variations among them. No cockroach species is truly asexual, however. All require the mating of a male and female in order to reproduce.