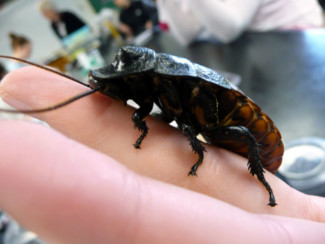 Roaches try to be as silent as possible.

Is a cockroach infestation something you can actually hear?

There are exceptions (keep reading), but roaches are generally quiet creatures. Any noise they create can alert predators (including us humans) to their presence. So roaches have evolved a stealthy mode of operation, and tread lightly.

Most every aspect of the roaches lifestyle is designed around covert operation.  For example, roaches are nocturnal. That is, they are most active at night. Roaches are avoidant of light, another protective behavior that helps them hide from threats.

Making distinct noises would go totally against a roaches mode of operation. That being said, there are some cases where you can actually hear a roach.

Roaches make noises as they scurry and jump

In a quiet room at night, you can sometimes hear cockroaches jumping and crawling. This is especially true of very large roaches. Many a night I have lay in bed and heard the telltale noises of a roach.

For example, one night I left an open can of Coke on my dresser. After turning out the light, I heard the soft pinging sounds of something tapping on the aluminum can. I just knew it must be the large roach I had been seeing from time to time, but was never able to catch. Sure enough, I turned on the light and caught the big roach sipping my Coke. Luckily I was able to grab a book and terminate the vile intruder.

In the dark, roaches crawl up walls and jump from here to there in their search for food, water, and mates. If you listen closely, you can sometimes hear these distinct sounds of roaches on the hunt.

If you are trying to find a roach in your room that has escaped to a secure hiding place, good luck with finding it. When a roach is spooked, it will hide and not make any noise. It knows you are searching for it and likely won’t emerge again until it is dark in the room.

When roaches mate, they sometimes make slight chirping noises as they rub together. Additionally, during a territorial dispute, competing males may attempt to warn each other off by making slightly chirping noises that are slightly audible to the human ear. It is difficult for the human ear to pick up on these soft sounds, however.

In North America, the typical roach species is either the American or German. Neither of these types are known to make much noise. There is one species called the Madagascar that is famous for the hissing noise it makes. You can listen to it here.

Madagascar hissing roaches are one of the largest species of roach. They are a unique exception to the general quietness of most kinds of roaches. Madagascar roaches hiss as a warning to predators and other roaches, and also during mating. The unmistakable sound is made by expelling air through their spiracles, or breathing holes, on either side of their body.

How does a cockroach hear and see us?

A cockroach doesn’t have ears. But it can “hear” by detecting vibrations, both in the air and on the surface. They do this via a pair of antenna on their head.  Roaches can also “hear” by detecting chemical signatures in the air via these antenna. In this way, a roach can sense the presence of predators and prey in their environment.

Roaches have a pair of compound eyes that are not very acute, but are excellent for detecting movement. These eyes have excellent night vision, and provide a 360 degree viewing area.

Only a handful of cockroach species make any distinguishable noises. You can sometimes hear common roaches as they scurry about at night,  but it is not very useful to rely solely on sound to detect them.

Instead, one of the best ways to detect the presence of a roach population is by looking for roach feces. These droppings look like ground pepper or dirt and are a dead giveaway for a roach infestation. Roach poop tends to accumulate in places that aren’t cleaned often, such as under the fridge.

If you see roaches during the day, that is another sign of infestation. They only come out at night unless forced otherwise by lack of food and water.

Photo: “exquisite” by leiapico is licensed under CC BY-NC